We are a caring community dedicated to the free and open search for spiritual, intellectual and emotional growth.
Facebook

Worked on the patio with Scott and Marcus for about five hours today. This is the hard part and the time consuming part of laying paver circles – filling in the triangle gaps where the circles touch. This involves either finding a piece of paver saved from the old patio that fits, or cutting a block to fit the space. This is what it’s supposed to look like when it’s finished. 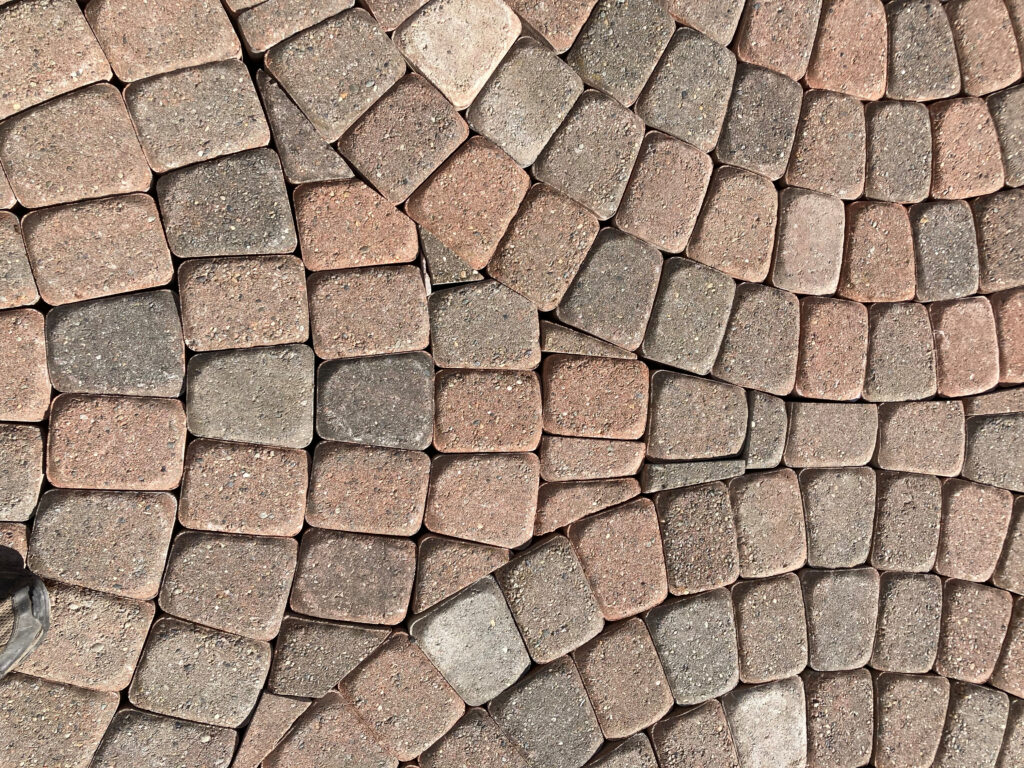 This is the paver wet saw I use to cut the blocks to shape. It has a 14 inch diamond blade, cooled by a spray of water. 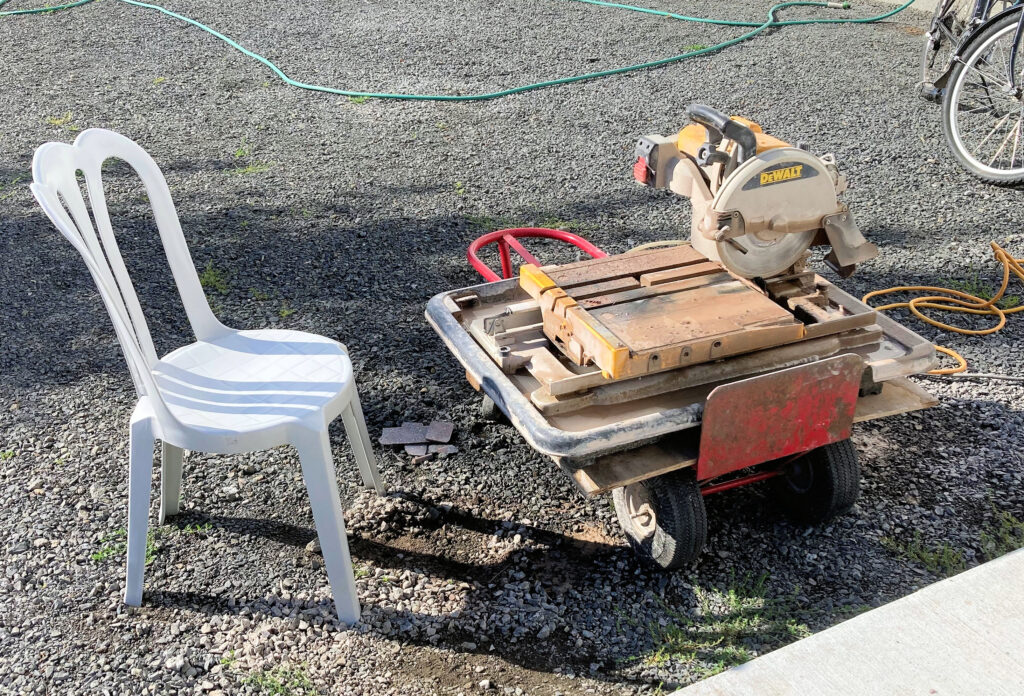 Marcus and Scott are standing up to work the kinks out of their knees. I think five hours is about enough up and down on knees to fit pieces of the puzzle together. The patio is at least 95% done. There’s just a bit more paver cutting along the block wall. Anybody want to help me finish it this weekend? 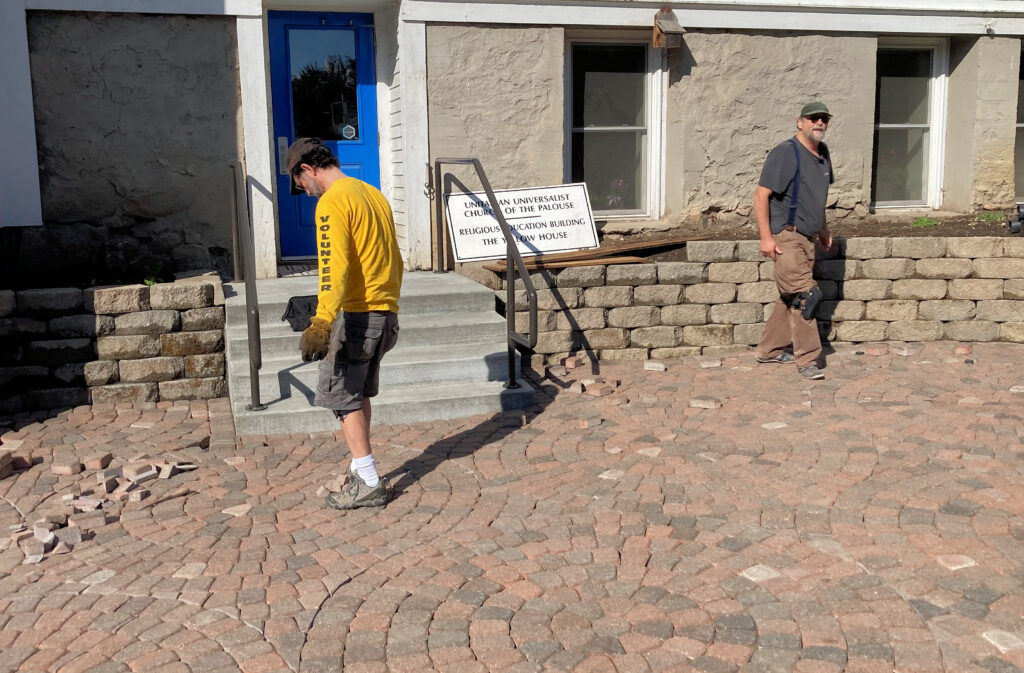 Our UUCP insurance company recently sent me a box of sensors to detect water leaks and temperature abnormalities in our building. They noted that frozen pipes and water leaks are a major cause of insurance claims among their church customers. The two small oval devices are the sensors, which communicate with the bigger round device. The big device then uses the internet to send data, and if necessary, an alarm, to selected addresses. Currently I am the designated recipient of temperature and water data. The Building & Grounds Chair will be added and perhaps others. 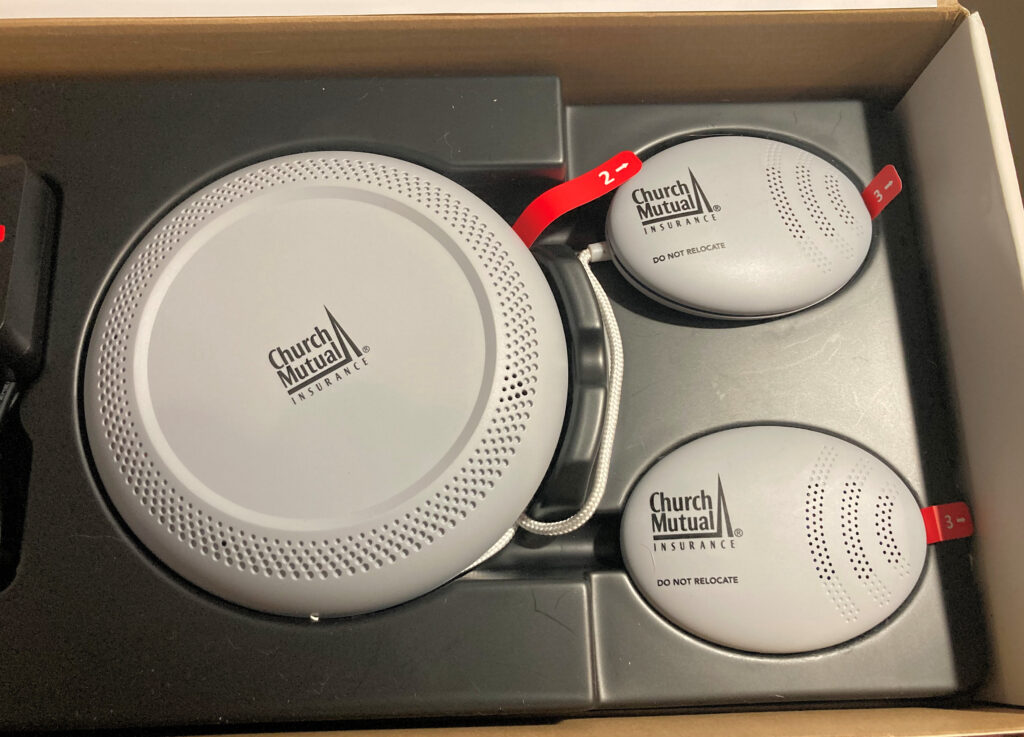 The two sensors have been activated. One is in the kitchen and the second is beside the water heater in the addition. Both are pretty much out of sight, but close to possible water leaks. The app on my iPhone has so far not shown any water leaks, and temperatures are normal.

I plan to get two additional sensors. One will be placed in the pit under the elevator. Do you remember last spring when the ground was actually really wet? Some of the underground water which regularly plagued the Yellow House actually flowed under our new addition and managed to seep into the elevator pit. A portable sump pump was used to pump out the water. Our contractor is committed to installing a permanent sump pump in the pit. A water sensor in the pit will be an additional check that the pump is working properly.

The second additional sensor will be placed above the ceiling on the third floor. There have been worries that if we ever have subzero weather again it might get really cold up under the roof and freeze the sprinkler pipes. A sensor up there will let us monitor what’s happening, so long as we have power and internet connectivity.

My current project is reusing the paver blocks that we saved from the old patio and stored on the east side of the church. The new patio will be the area between the old church building and the sidewalk. Reusing the pavers is going to be a labor of love from a lot of hard-working volunteers. I fear that we are wearing these guys out. We could use some more volunteers.

The contractor left the coarse gravel in the area graded about right. 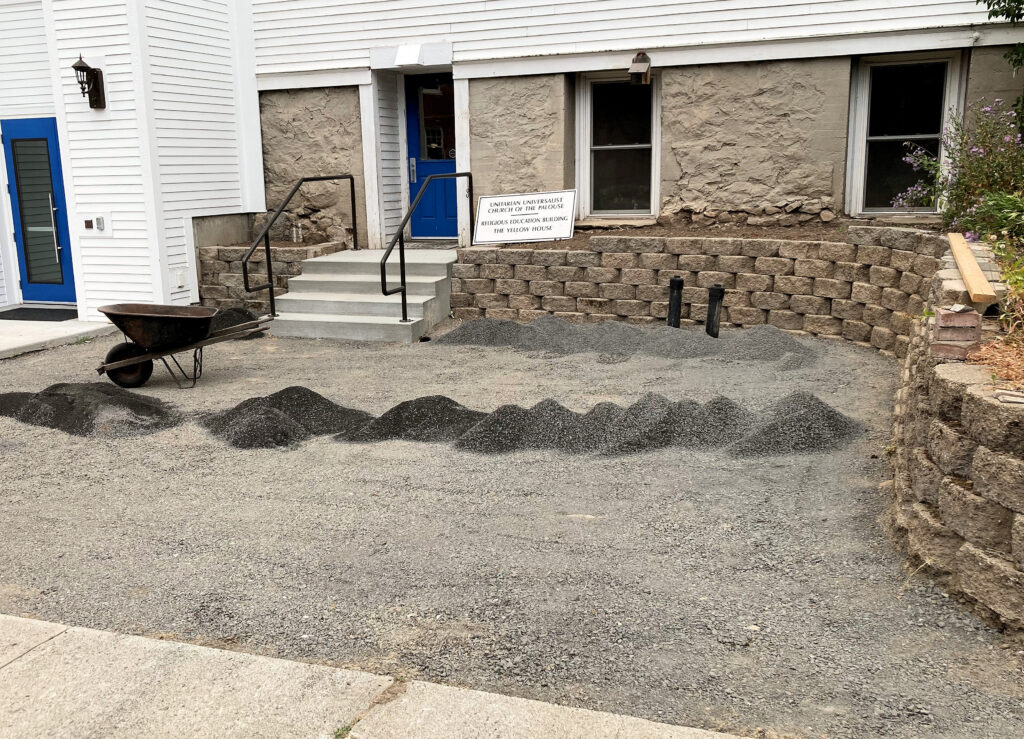 The plan is to place the pavers according to this circle pattern. Each color represents a different shape of block. 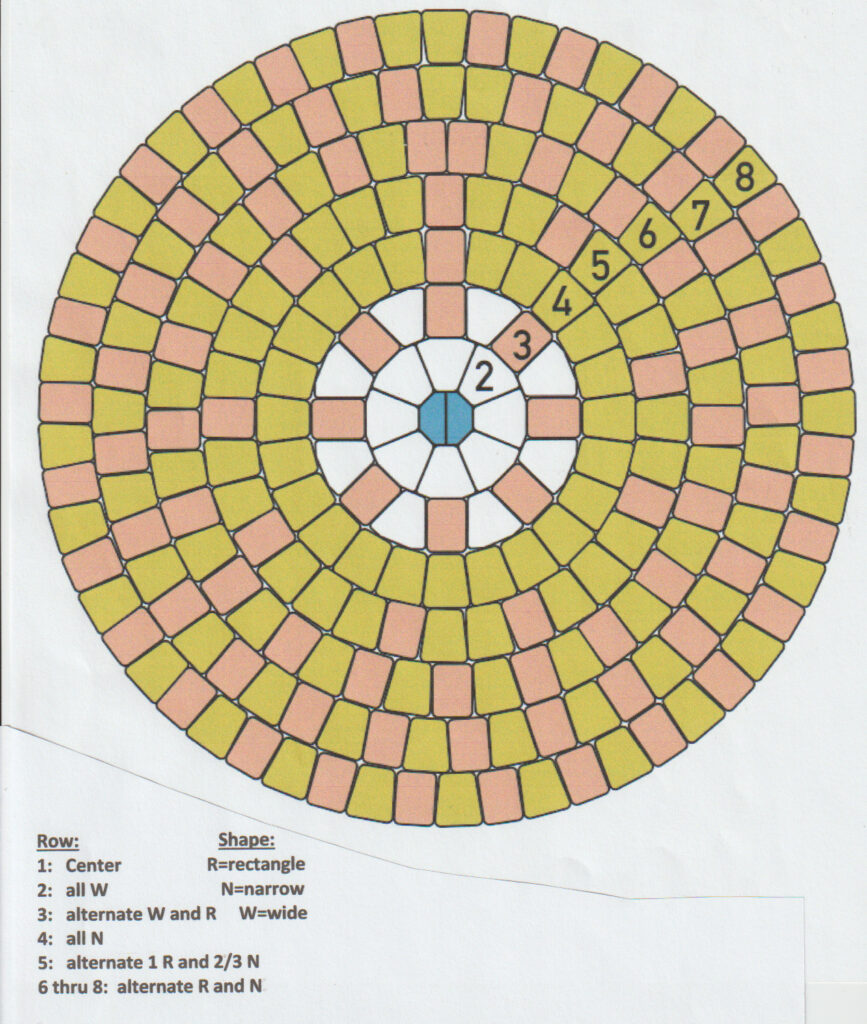 We started with a row of half circles along the sidewalk. 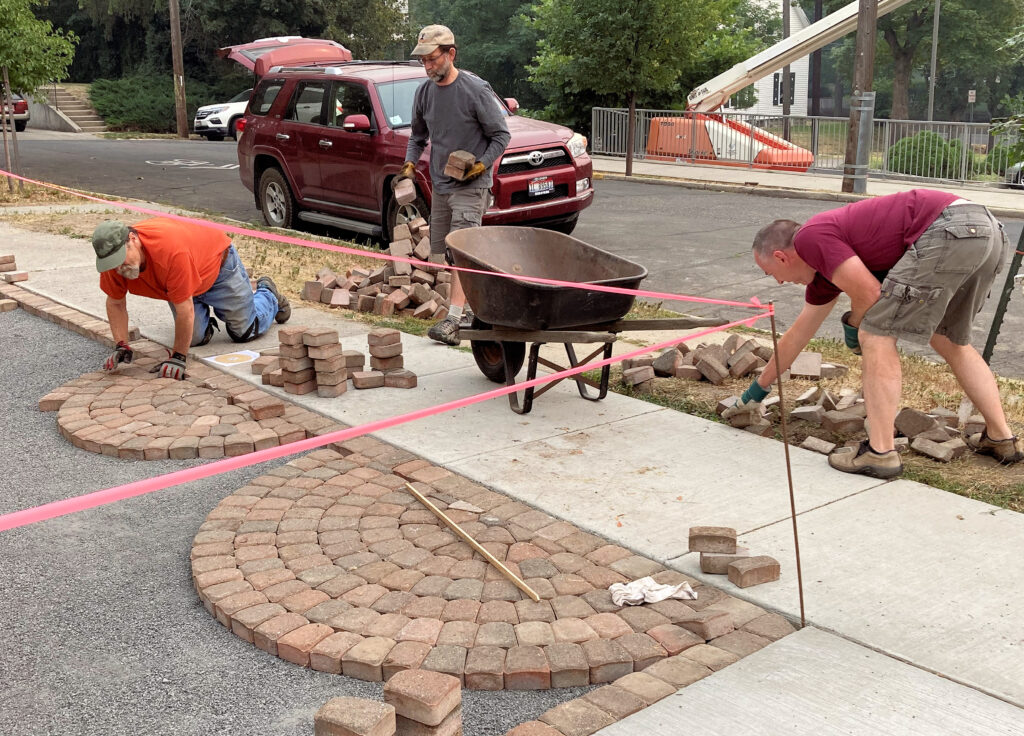 We rented a bobcat to move a supply of blocks closer to where we are working. 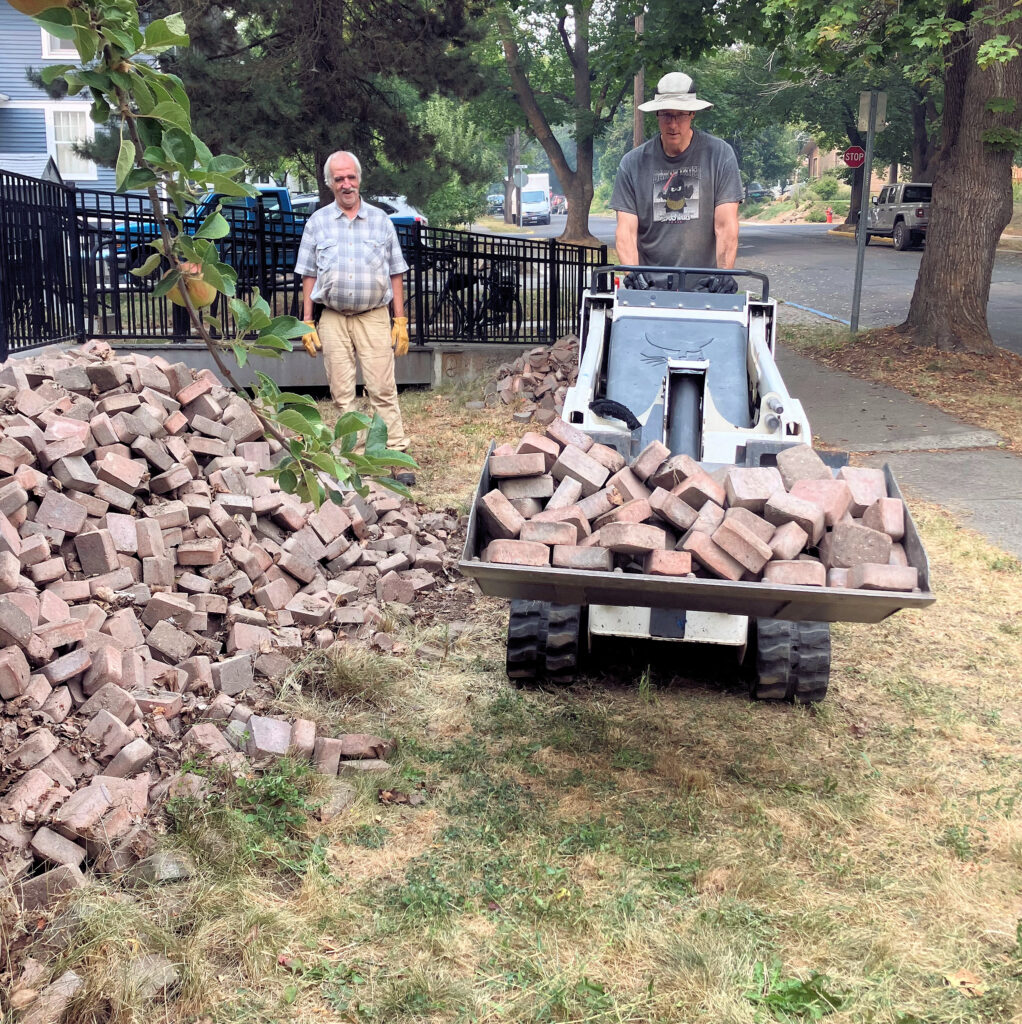 Doing it right is a learning process. Somehow, I am the teacher, since I helped pave the old patio 25 years ago and then I put circles in our driveway. 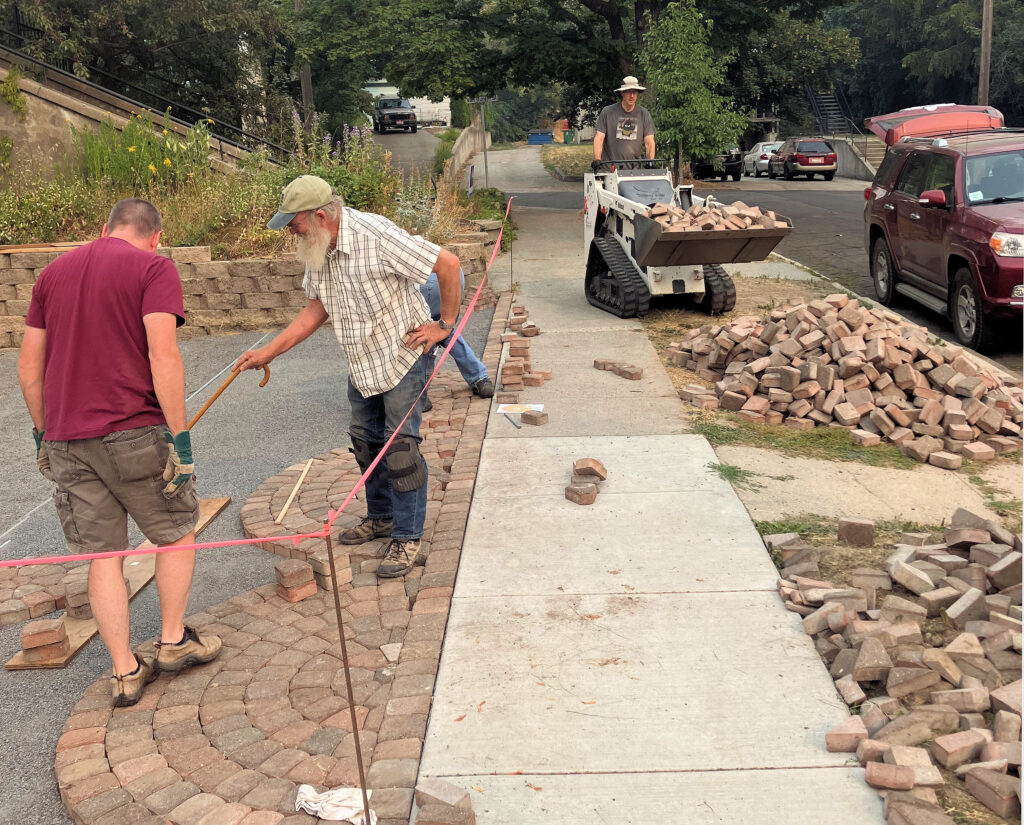 Each circle starts from its center. It is an exercise in applied geometry to get the center blocks in exactly the right place, and then build outward. If the measurements are exact, each circle will just touch four neighbors. 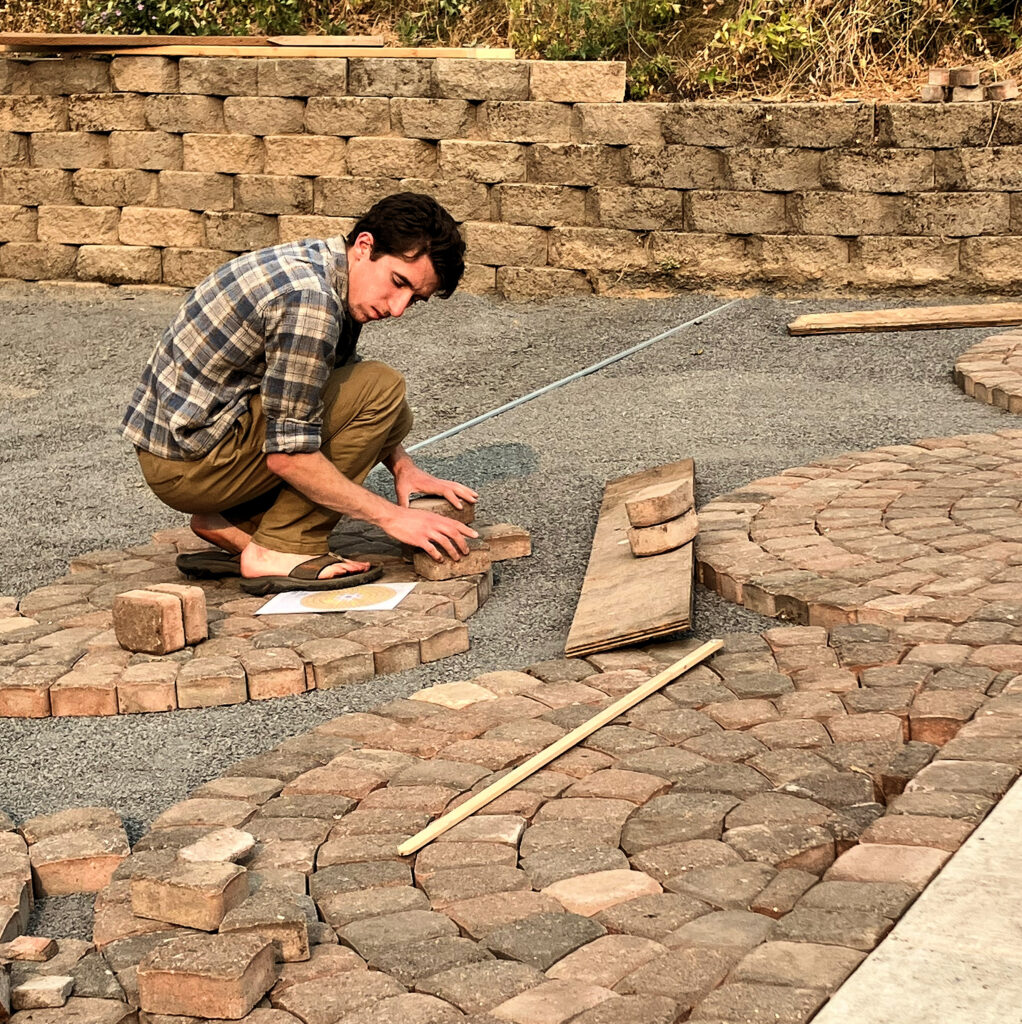 When circles touch, they leave a triangle shaped void that must be filled. Parts of the void can be filled with whole blocks from the pile, but other blocks must be cut to fit. Some of the pieces saved from the old patio will fit. Blocks are cut with a special saw with a diamond blade. It takes almost as much time to fill the voids as it does to lay down the circles. 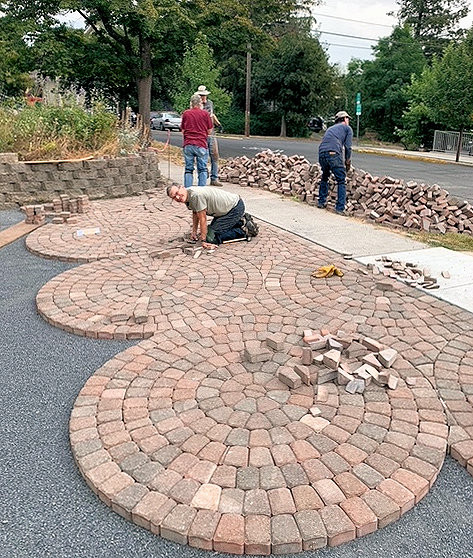 Several more circles have been added. There are always piles of cut pieces scattered around, in the hope they might fit. 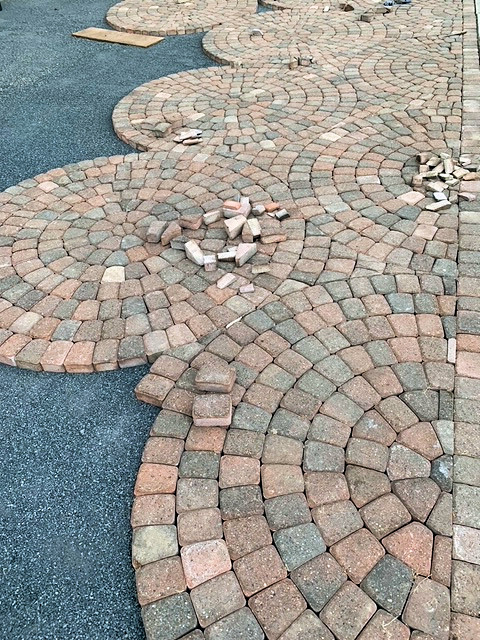 Scott’s circle has touched the wall. There will be more pieces to cut to fit. 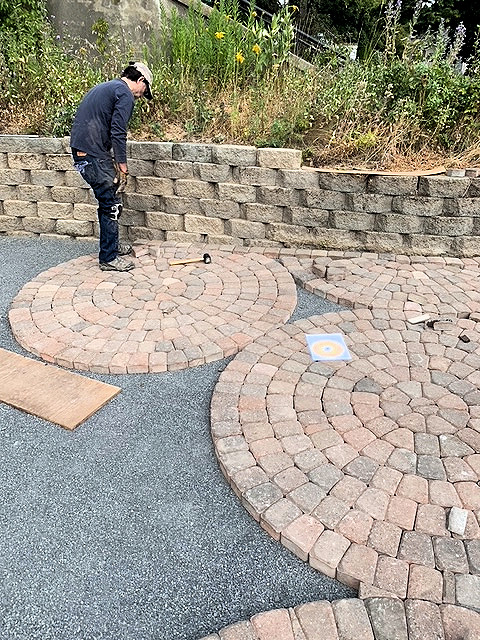 Here are some pictures from our UUCP grand opening street party on September 4th. Thanks to whoever took these pictures – I think I grabbed them from Facebook.

Music was provided by our house band, “The Senders” set up in the middle of Second Street. John Anderson, on the electric keyboard, grew up in UUCP and was our Music Director for many years. The Senders have played many times for parties in our sanctuary. 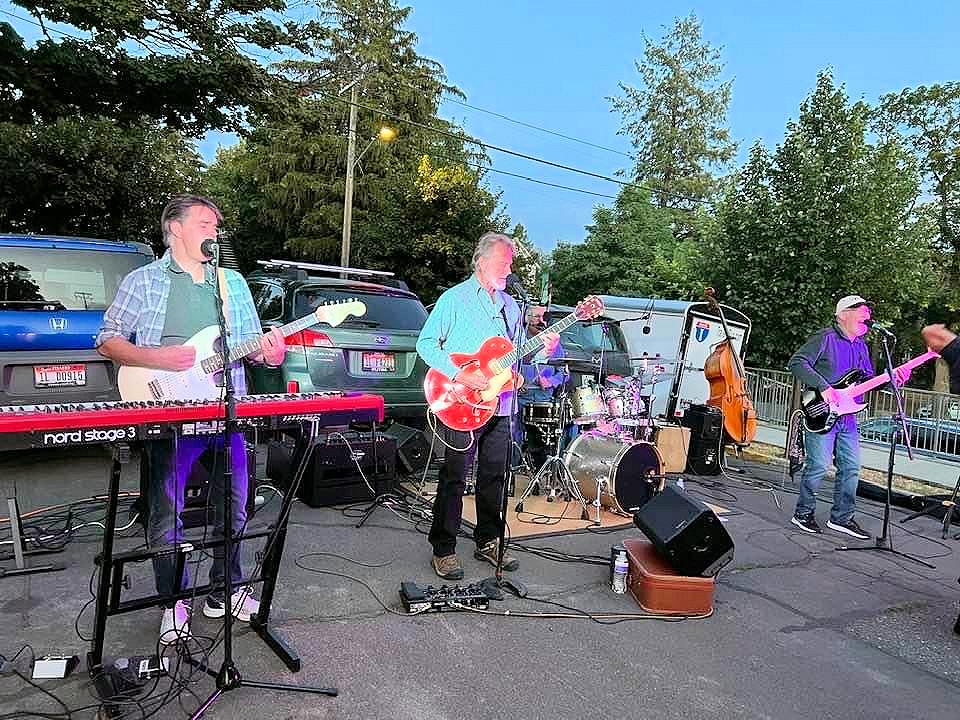 The many watchers found seats on the gravel across the front of the church, talking and watching the large crowd of dancers in the middle of the street. I think the band played until 10pm. 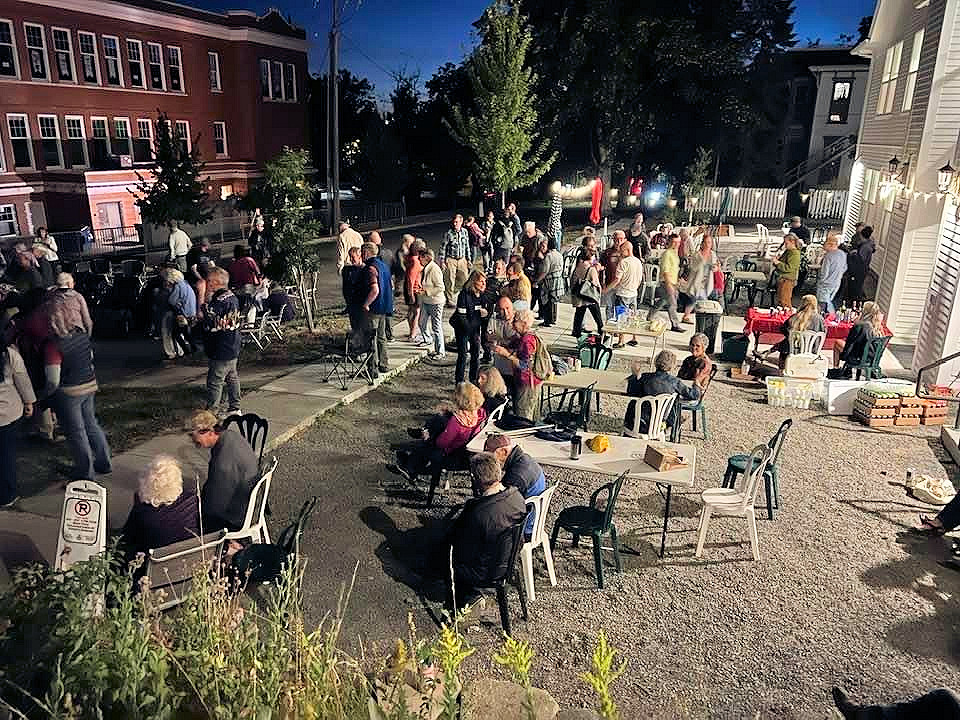 The renovated church and new classroom/office addition were open for tours. I heard estimates that the total of lookers and dancers might have totaled 200. 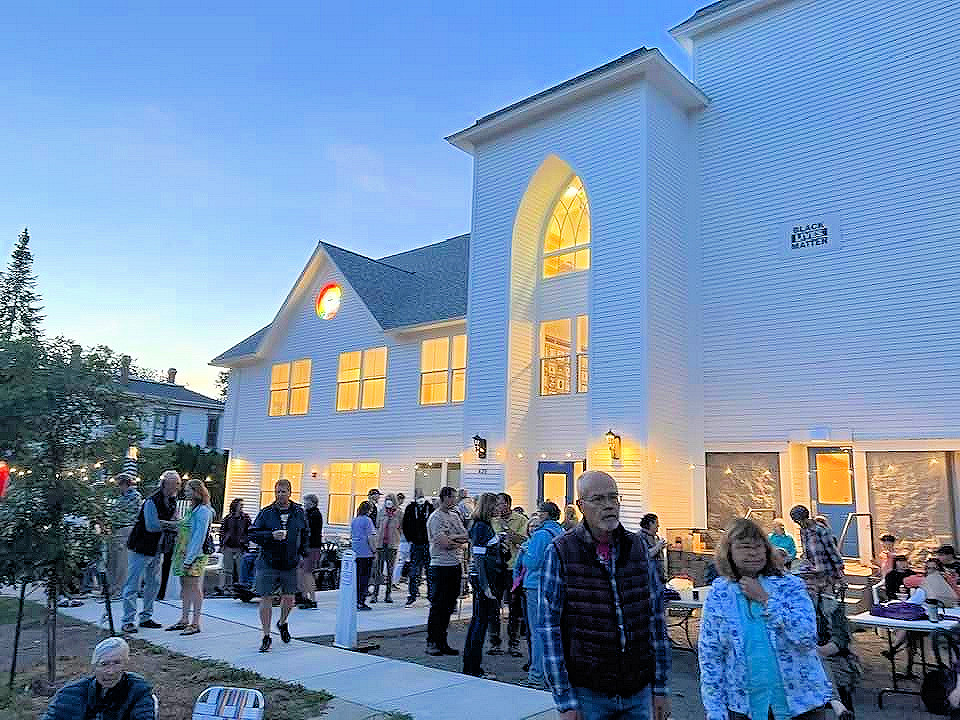