We are a caring community dedicated to the free and open search for spiritual, intellectual and emotional growth.
Facebook

Click below to see a summary video of our Capital Campaign Building Project.

Many thanks to Duane DeTemple for putting this together!

Both the addition and the old church continue to yield surprises. Following this year’s wet spring the sump in the bottom of our new elevator pit overflowed with water- obviously water that had flowed horizontally under the foundations of the new addition. One of the few remaining items on our construction “to do” list is a permanent pump for the elevator shaft sump. Hopefully this is the last of our “supply chain” issues.

This was not entirely unanticipated. The Yellow House basement regularly had water problems addressed by water collector channels in the floor and a permanently installed sump pump. The moisture that seeped into the old church basement was less visible – flowing under the wooden floor where it rotted floor joists and rusted the cast iron support posts. It was perhaps 15 years ago when a sump pump, a forced air blower, some new steel support posts and a partial new floor greatly improved the moisture problems under Friendship Hall. In our more recent construction, the wood floors under the kitchen and office were replaced with concrete, and the 4 remaining cast iron posts were replaced with steel.

However, it is too early to celebrate. I got a phone call Friday afternoon reporting that water was flowing into the kitchen, apparently coming from the east exit stairwell. Working with a mop, Margaret Dibble had collected 4 or 5 gallons from the kitchen and Friendship Hall floors. There had been about 5 inches of snow that morning, followed by a steady rain. Apparently, the melt water ran down the steps and found its way inside. Exactly how remains uncertain. 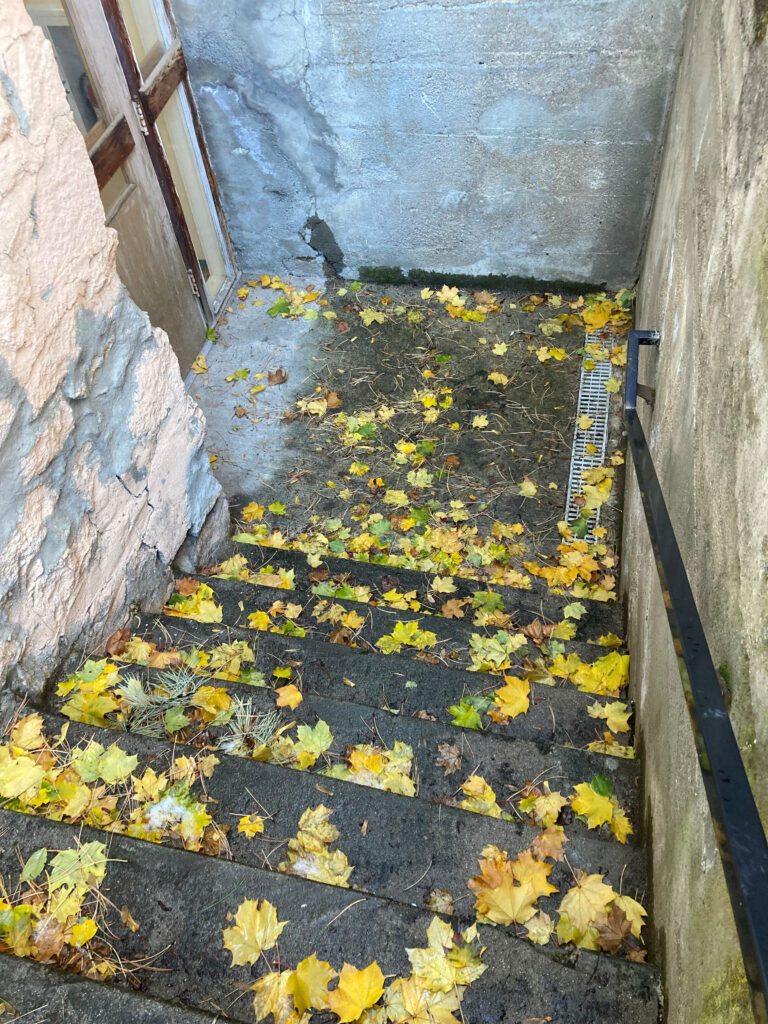 This picture of the stairway taken several days later shows the drain on the right, where water is supposed to go. The drain was neither clogged nor full.  While the landing is rather flat, it appears dry near the door so there must be some slope toward the drain. There is also a raised doorsill that looks watertight. I think the villains were a worst-case deluge and the notorious rock foundation under our old church. There are wide cracks where the stairwell wall butts against the foundation which probably let water flow into and through the foundation. 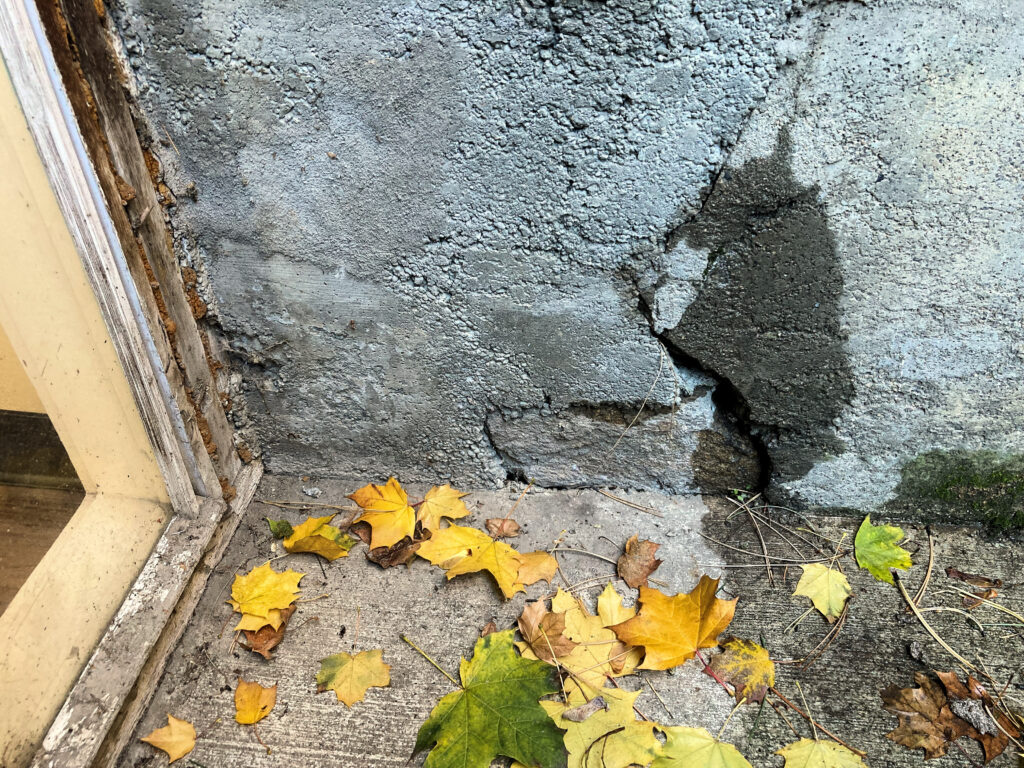 In the past, intruding water could flow unobserved under the wooden kitchen floor. Now, the only place for water to go is on top of the new concrete floor. Several fixes seem possible. First, those cracks should be patched with some modern material that bonds and flexes better than the old patching cement mixes. Unfortunately, this will have to wait until it dries out and warms up, probably next summer. In the meantime, I am trying to think of some way to channel worst case melt water toward the drain and away from the cracks without blocking the exit door. A third water source might be the roof of the old church. The gutters are 30 feet in the air, but they badly need cleaning and work is needed on the downspouts. They presently dump water quite near the stairwell. The problem is obvious in the second picture – the soil behind the wall is so wet that water is oozing through the cracks between the wall and the foundation. We also must remember to clean leaves from the stairwell, so they don’t clog the drain, and clean out snow to prevent another deluge.

I see one other potential leak problem. It is visible below in my picture of the middle of the three south windows. The concrete sill has broken up – a possible entry path for water. 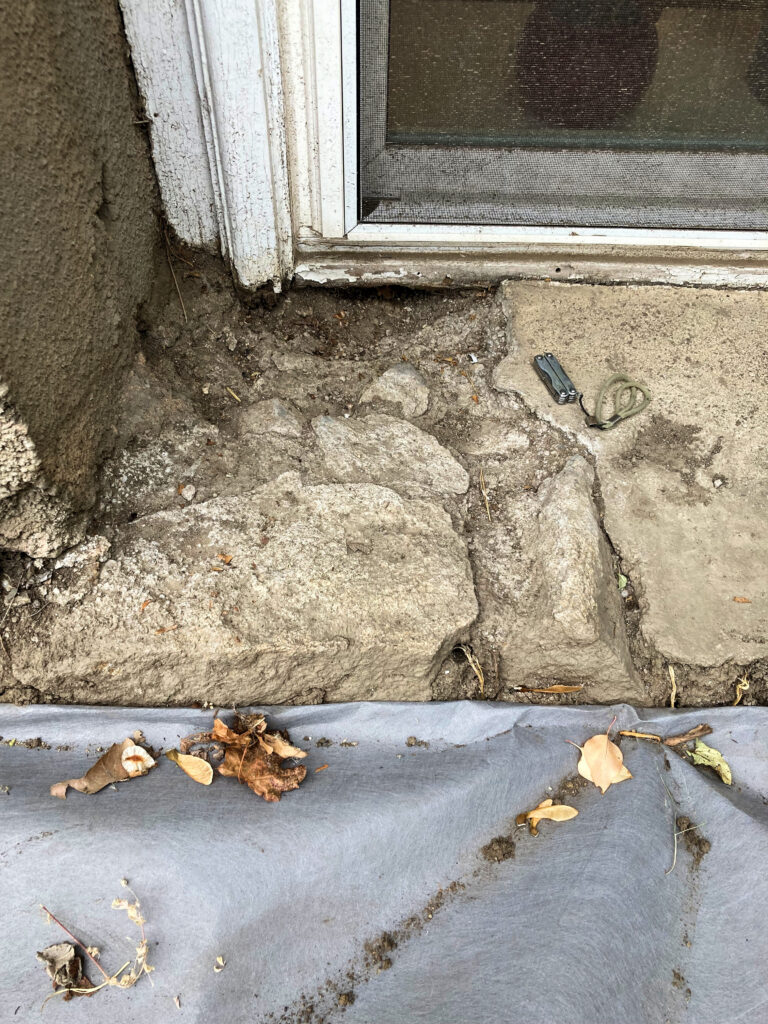 Note how the concrete layer was daubed over the top of rubble foundation rocks, and against (not under) the wood sill board. The rock on the foreground actually stuck up through the old concrete sill and was probably the cause of its breaking up. Presently this opening could collect water from a strong south rainstorm and channel it down into the middle of the 3 foot thick foundation wall. The other two window concrete sills are unbroken, but this spot needs a patch when it warms up and dries out. 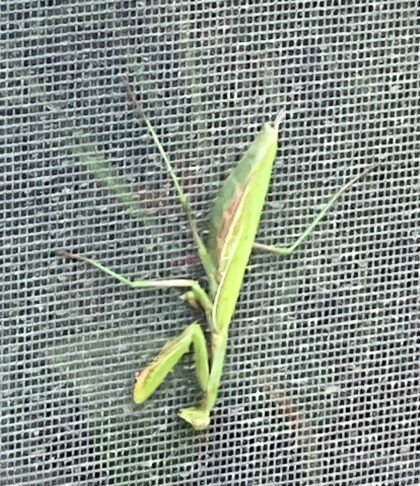 The second picture shows what caught my eye as I was looking at the windows – a praying Mantis clinging to the screen. Seems appropriate for a church planter bed. I didn’t ask if it was Swedish Lutheran or UU.

Each year the Moscow Historic Preservation Commission presents Orchid Awards to recognize outstanding examples of historic preservation and stewardship in the community. This year’s honorees include an individual, two community organizations, and the owners of two residences. One of the Orchid Awards went to the UUCP for the renovation of our 115-year-old church and for the new architecturally consistent attached office and classroom wing. The award was presented by Moscow Mayor Art Bettge and Commission chair Nels Reese and accepted by Rev Elizabeth Stevens at a ceremony November 3rd. 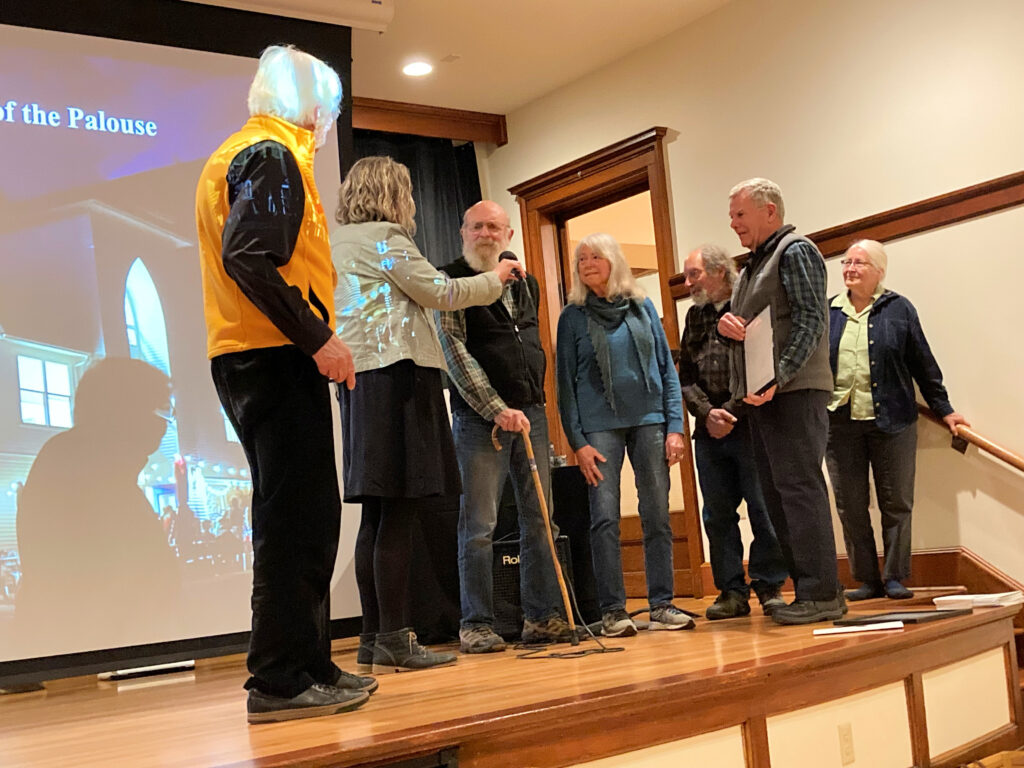 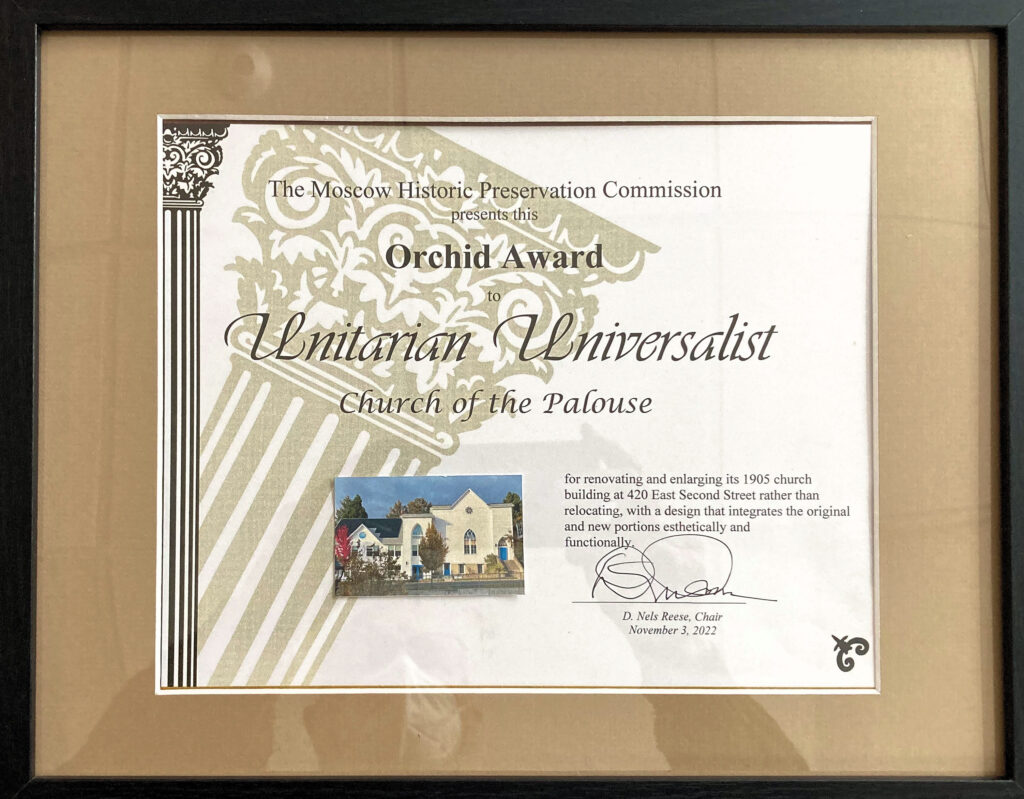 The UUCP page from the brochure describing our project 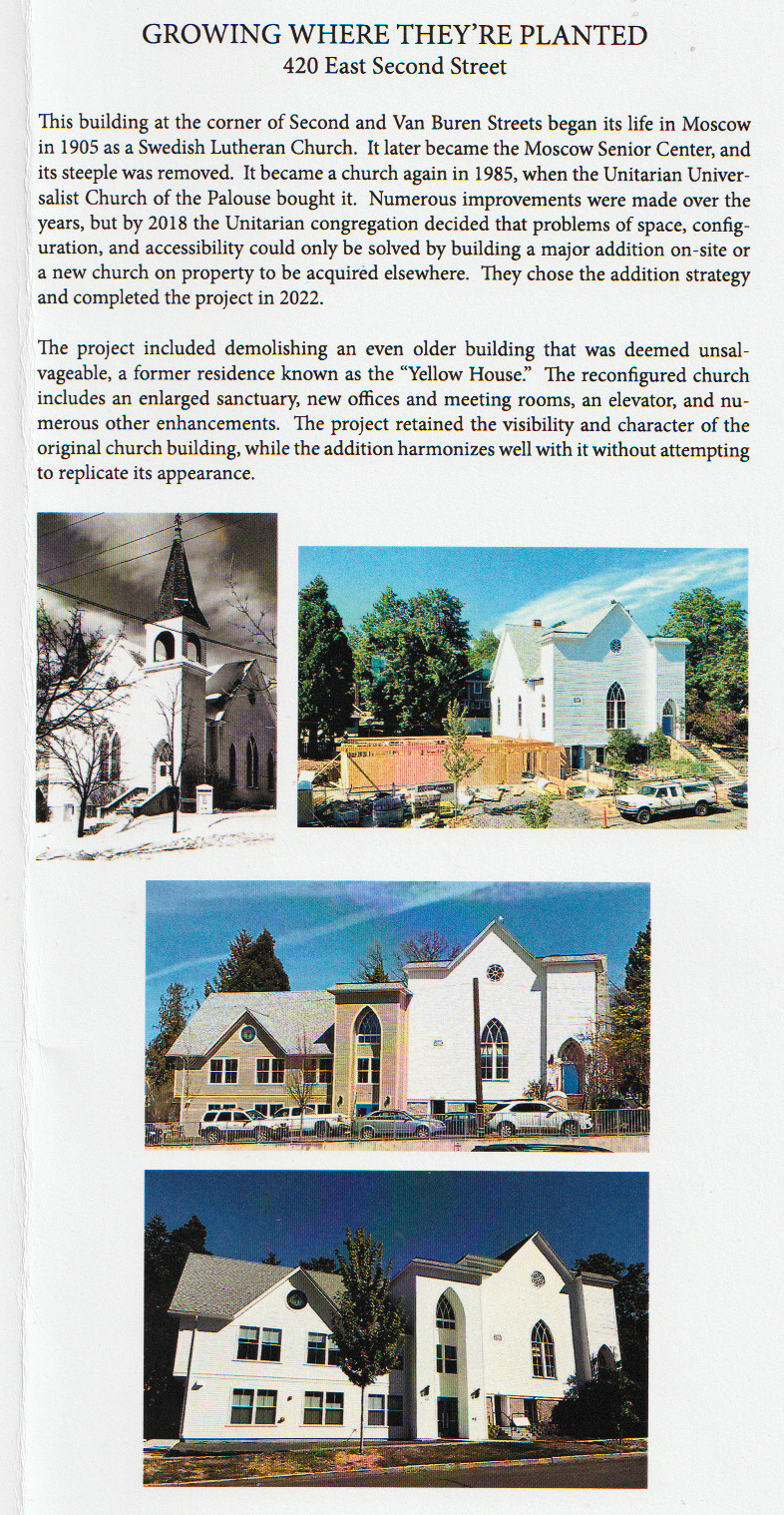 And an image of the UUCP project taken from a window of the 1912 Building. 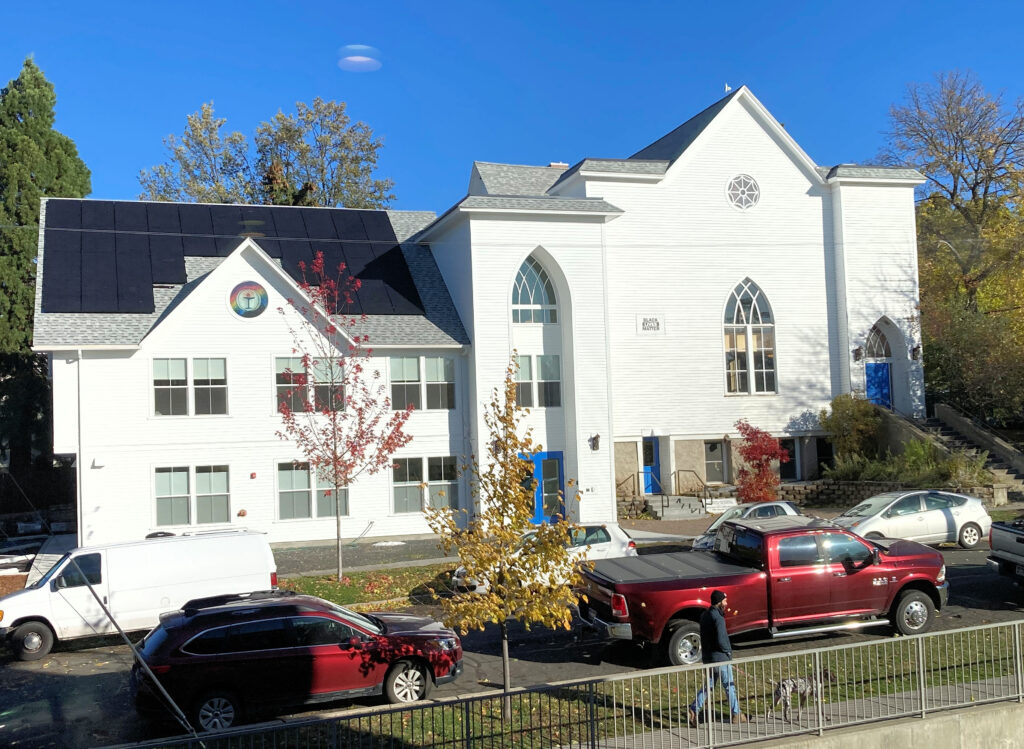 The solar project is progressing. I posted a picture yesterday showing the panels near the ridge and the west side. I took the following picture mid-day Thursday. They seem to have finished the west side and are working on the east side of the gable. I have no idea what is involved for an electrician to hook up the wiring. 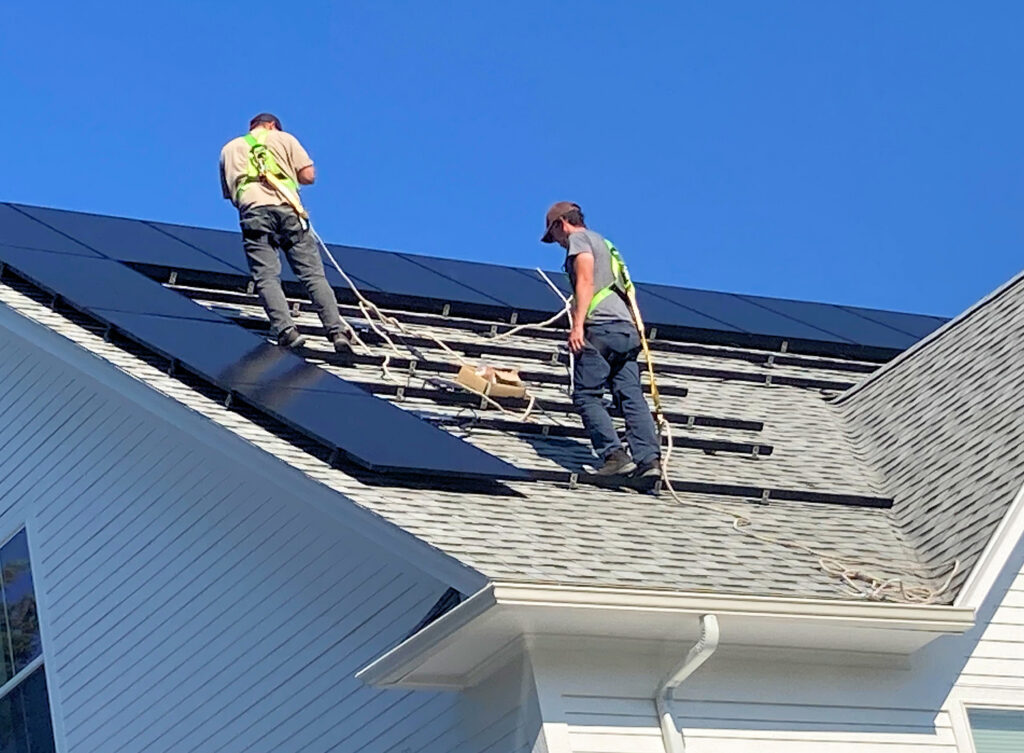 Thinking about the bike parking project led me to wonder what we are going to do with at least 8” of topsoil that we will excavate around the racks. This thought led to contemplate the raw dirt bank at the northwest corner of the old church building. The plan has always been to rebuild the block wall and stairway that had to be removed at the start of our construction project. It is presently a quite useless space, and the raw bank would be very muddy if it ever rains again. 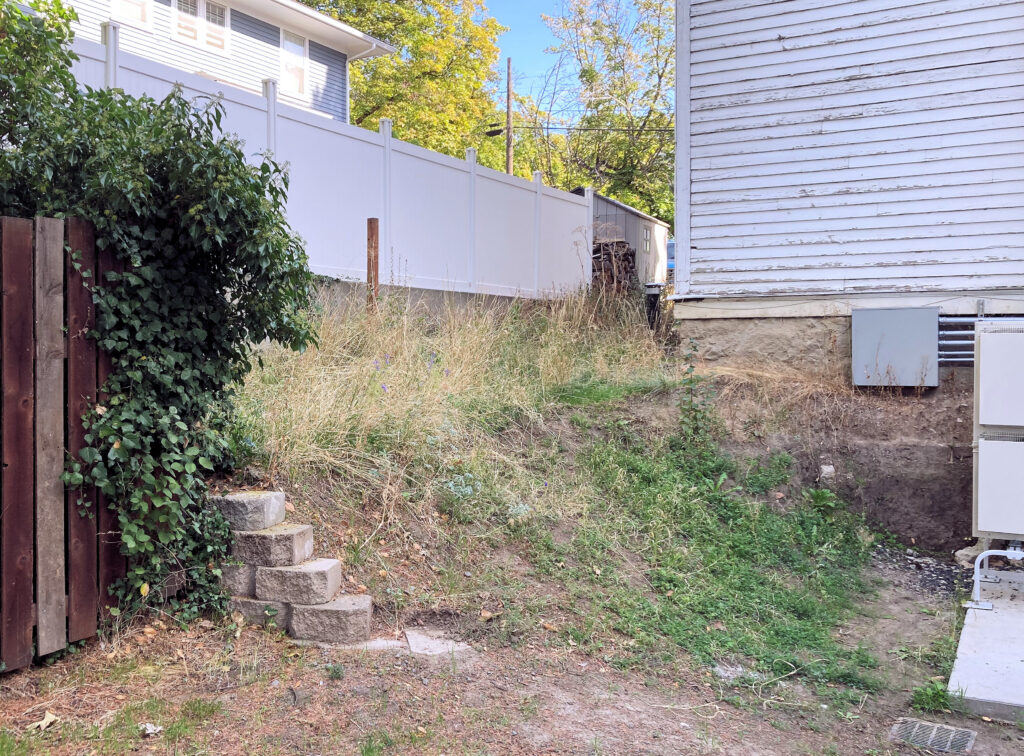 This is a diagram of what I visualize doing in both areas. For the bike parking, we need to excavate to about 8”. This will be backfilled with about 6” of ¾- crushed rock, compacted, and topped with a layer of fine rock. Somewhere in this process the racks will be put in place, and finally the pavers will be placed around the racks. I am open to discussion about the number and position of the racks, and discussion about the size and shape of the area that needs to be excavated. 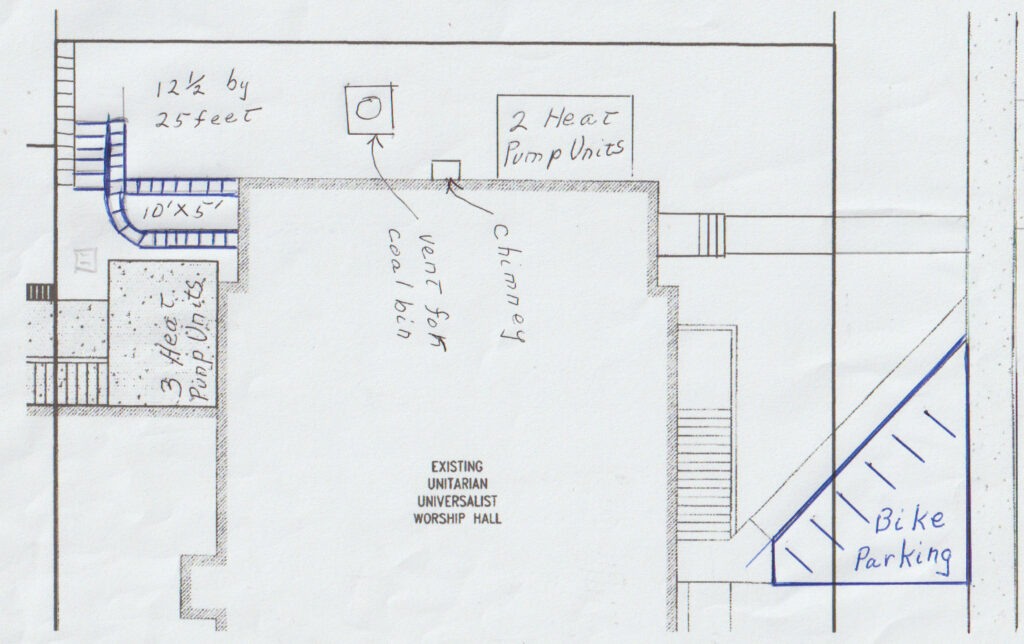 The diagram shows my vision of how the wall can be built. At 4’, the wall would be too tall to stand without special engineering. I propose two walls, each a bit more than 2’ tall, about 5’ apart, stepping up the hill. The area between the two walls will be big enough to hold a significant part of the topsoil removed from the bike parking area. I would turn the bed between the two walls over to the Green Sanctuary Committee for native plants.

There is an existing wall against the left side of the space which I propose to use as the left side of a stairway. The new wall would step up the hill and form the right side of the stairs. The upper wall continues the line of the back wall of the church, forming a long rectangular room 12’6” wide and 25’ long. The use of this space is open for discussion.

This all suggests that we should build the wall first, before the bike rack. I think we can build the walls ourselves, rather than hiring someone. I have done it before, and I can supervise it again. All we need is some strong people, stronger than our geezers.

The solar installers are making progress, but slowly. They got started about 10 days ago, dividing their time among several projects, then lost a few days from rain. This week they got most of the rails in place to hold the panels. 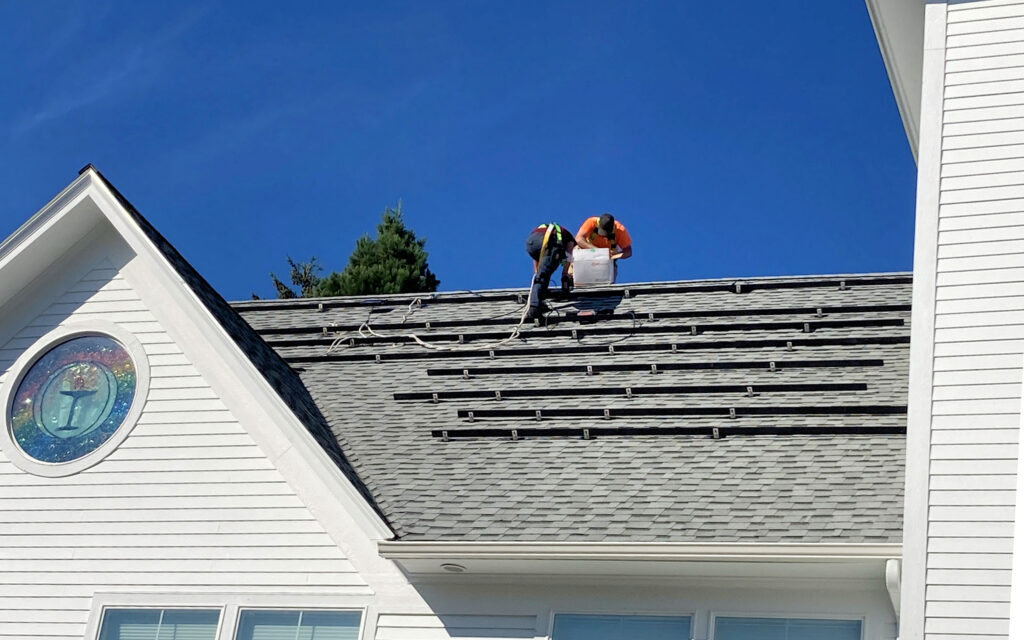 The roof is very steep and high, so they are careful to use safety rope and harness. They also object if anyone intrudes into their fall zone. I was OK working nearby on the pavers, but I did occasionally hear things drop. Once it was a $10 bill when he dropped his wallet. I chased it down in the breeze and put a bit of paver on it. 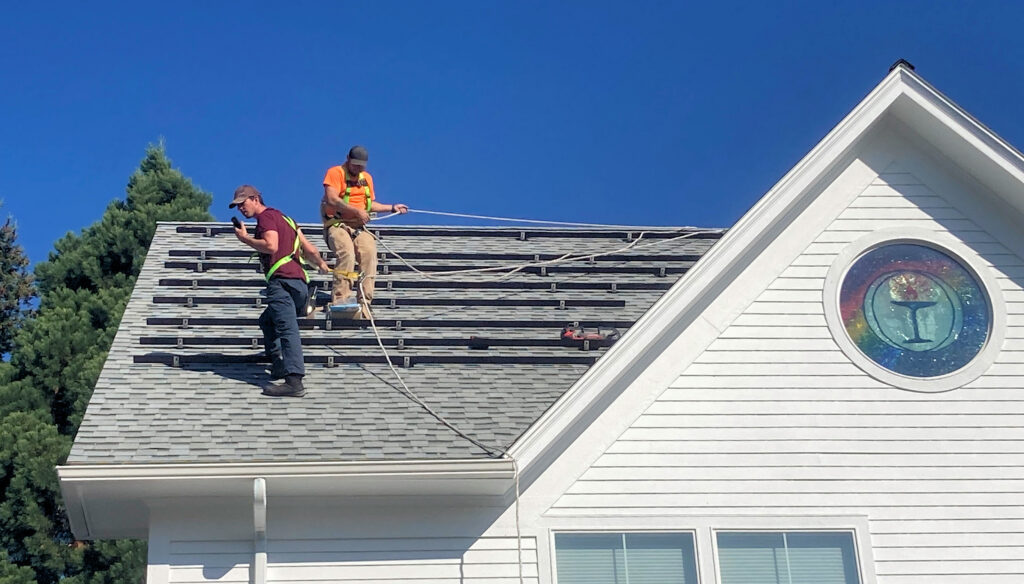 I still haven’t put the sand dressing on the patio yet. It seems there are lots of things around home that need taking care of before it decides to be fall. Next Tuesday sounds like a good day to do the sand.

We’re not done with pavers yet. We need to make a bike parking area east of the church reusing the bike racks we removed from in front of the Yellow House and church. It will go next to the ramp, probably on the south side. 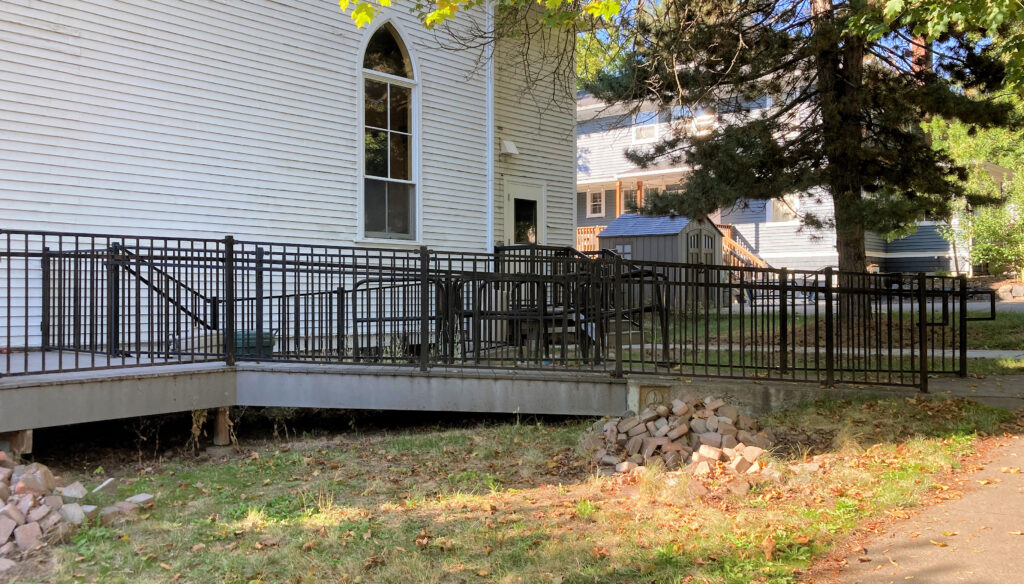 Prepping the area and installing the racks will be nontrivial work. The area must first be excavated, and the bike racks put in place. Then about 6 inches of coarse gravel must be levelled around the racks and compacted. Then comes a 1-inch layer of fine crushed rock. I am hoping someone will volunteer to lead the prep work. I can return to lead the paving around the racks. This drawing shows the general idea. 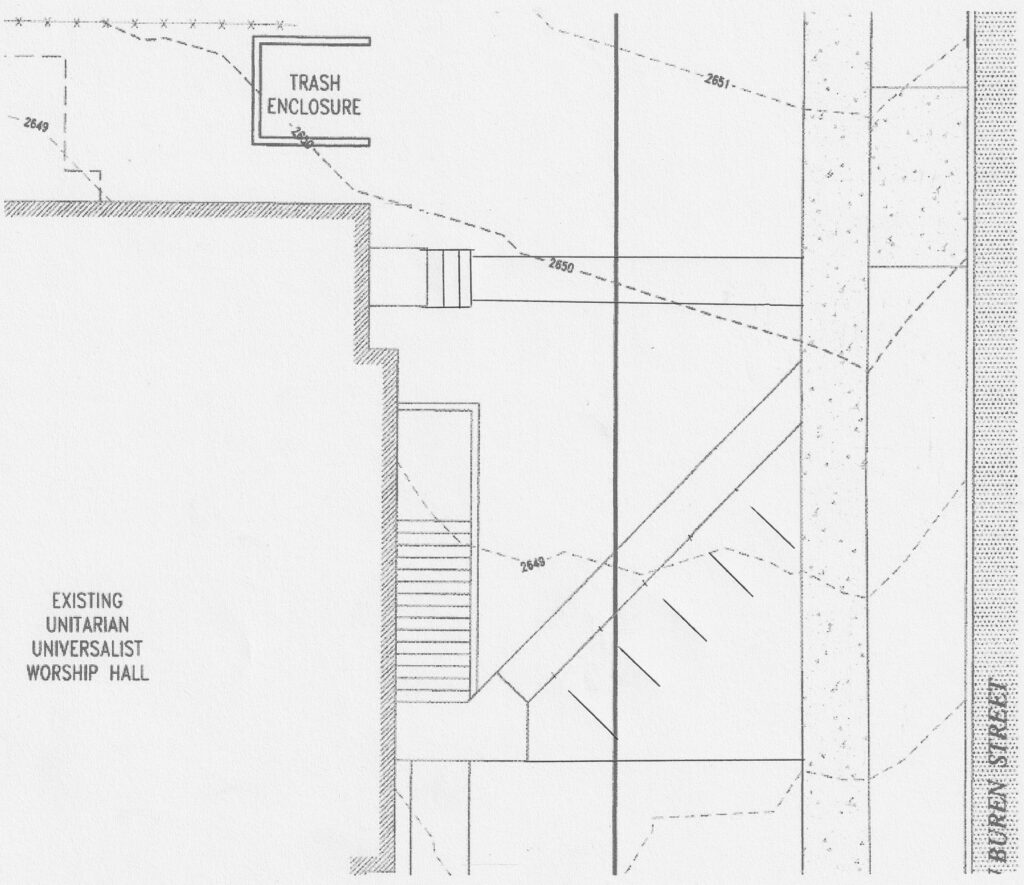 The patio pavers are all in place. I intentionally worked alone today, given my obsession with the detail of the circle pattern. I finished the cut and fit process at 5:30 this afternoon. I was beat, and my knees hurt, so I left the piles of scraps to pick up later. 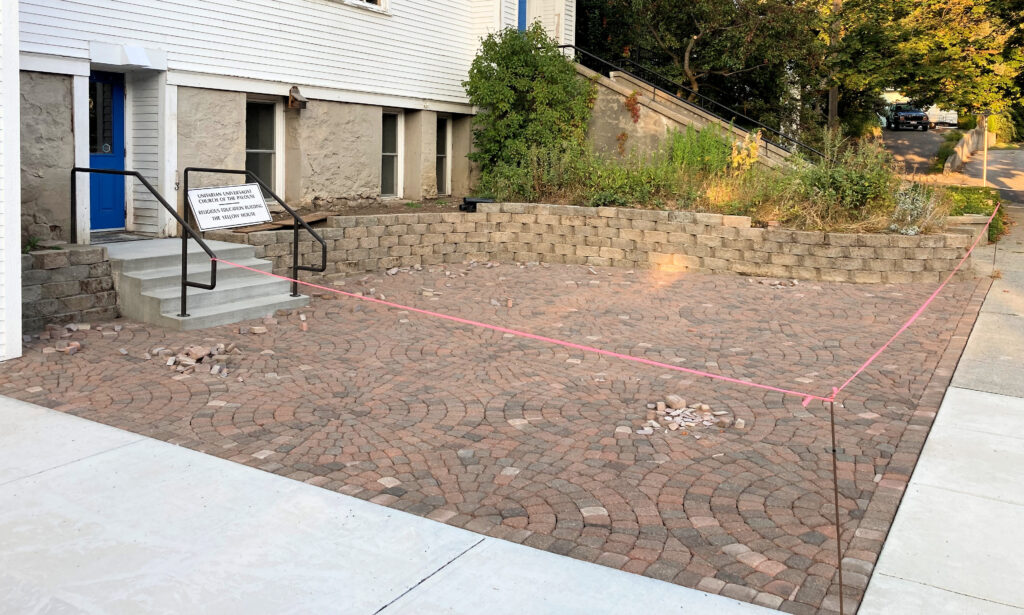 I want to thank all the volunteers who helped lay pavers; Pat Fuerst, Tim Hatton, Archie George, Marcus Smith, Dennis Becker, Scott Millner, Tom Salsbury, Chuck Harris, Al Poplawski, John Pool, Milo Flint, Steve Flint, Belinda Rhodes, and Shane McFarland. Did I forget anyone? The help of volunteers was essential for this project and was very much appreciated. I think everyone discovered that laying paver circles is interesting, but hard work – hard on the back, hard on the hands, and especially hard on the knees.

The work is not over yet. We need to pick up the scraps, distribute a layer of sand on the surface, brush the sand into the cracks, and work things into place with a plate compactor. After we declare the patio totally finished, we need to shift our attention to the east side of the church where we promised to make a bike parking area. We will reuse the bike racks that were removed from in front of the church and Yellow House. The pad, about 200 square feet, will get more pavers. Maybe we can recruit some biker volunteers.